For the second time in as many weeks, one of Miami’s neighboring municipalities is threatening to sue the city over plans to develop its valuable waterfront properties that lie along crucial county causeways.

The Key Biscayne Village Council voted late Tuesday to file a lawsuit against the city of Miami over a project in the works to rehabilitate the historic Miami Marine Stadium and redevelop the surrounding area. Village officials worry that a planned $16 million outdoor event space on the stadium grounds will be used to host dozens of Rickenbacker Causeway-clogging events, like the Miami International Boat Show, which is moving to the site in 2016.

The village will file a suit next week and then immediately stay the proceedings and enter into mediation, according to Village Attorney Stephen Helfman. Village officials say they’ve tried…

Brought to Miami by the Swire Group, perhaps the most reknowned, rock-solid developers in the world. Their reputation is all about quality developments; fianacially sound project. Brickell City Centre is a 9-cre, multi-use development, which will encompass the former spaces of some of Miami’s landmark buildings.

Here I present the latest information from “Curbed Miami”. Amusing, on point and a good red. I will chime in later with my musings; mostly algebraic, because we have been analyzing this development since its development.

My recommendation? I have identified 3 units which re available now and are incredible; not only from a pricing perspective, but from a unit-line perspective.

We have the scoop. We work the development. Call me and I’ll give you the latest scoop.

Now, from our friends at, “Curbed Miami”;

Although the residential aspect of the $1.05 billion Brickell City Centre megaproject doesn’t seem to have a website yet (nor is it included on this site) the sales center has opened the site Inhabit Miami is even reporting that the first tower is 50% sold out. BuzzBuzzHome provided renders and floor plans. This tower, called ‘Reach’, is the first of two residential towers in City Centre’s first phase. The second, further west, will be called ‘Rise’. Sales on that haven’t started. Nor have they on the 1 (or more?) residential towers in Phase II.

Here is an early Summer update of skyscraper construction in Miami. Since the last construction update in March, numerous new towers have been proposed and approved across the city. Most of these newly proposed towers plan to break ground in late Summer and Fall 2013. In the meantime, below are some updates on the towers currently under construction.

For a recap of these projects, with renderings and data, see: Miami’s future skyscrapers: Part 1 and Part 2.

Oceana, the first new development in Key Biscyane in nearly 13 years, is scheduled to receive its final touches in July.

When completed in 2014, the Bernardo Fort-Brescia of Arquitectonica-designed all-glass, 14-story double tower on a 10.3-acre site will constitute a gated community with 142 units and 500 feet of private beach.

Costantini, chairman of the Nordelta gated community outside Buenos Aires and the founder of the Argentine capital’s Malba art museum, may exhibit works from his private collection in the Yabu-Pusehlberg-designed lobby. The community will also feature a social lounge, restaurant, pools, cabanas, a tennis court and a putting green. 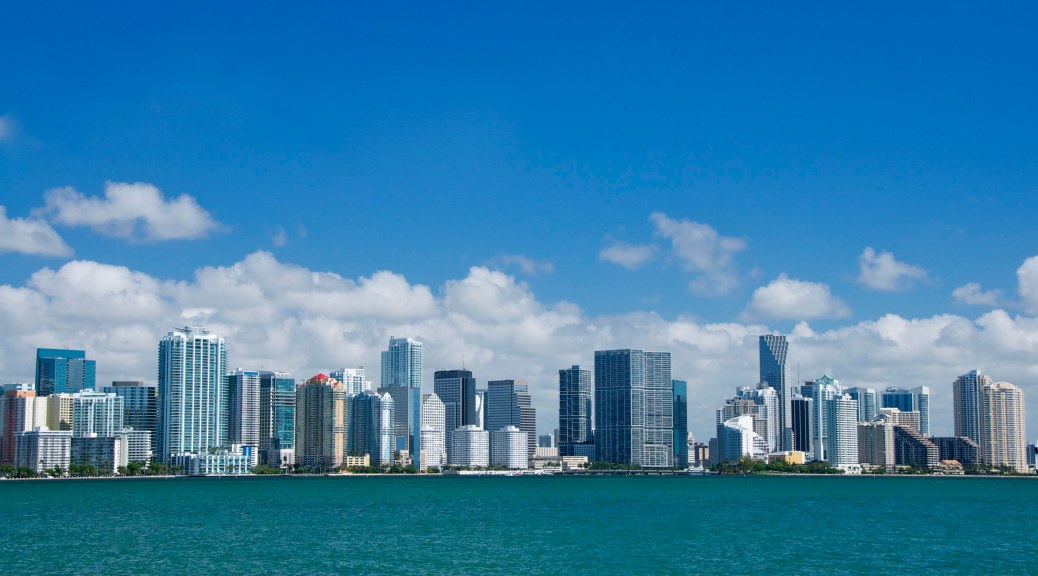 Excellent synopsis of the change taking place in the downtown Miami skyline.

By many accounts, the Great Recession is hardly over. With rising unemployment rates throughout Europe and continued stalled economic growth throughout the Western World, the global economy is still trying to recuperate from the excesses of the 2000s. The years between roughly 2002 to 2008 brought a massive building boom to Miami, particularly the Downtown and Brickell neighborhoods. Between these years, 48 skyscrapers (buildings taller than 400-feet or 120 meters) were built. These new towers completely altered the Miami skyline, giving it the title of “America’s third-largest skyline.” These skyscrapers also increased the Downtown area’s population by 30,000 people, growing from 39,176 people in 2000 to 71,000 in 2010.

This increase in population has brought renewed life to Miami’s inner city neighborhoods that had been abandoned since the 1960s for suburbs further away. Brickell, the neighborhood south of Downtown, is now one of the city’s most popular neighborhoods. Traditionally known…

This South Beach condo recently sold for $25 million. In just the first six months of the year, 400 condos priced at $1 million or more sold.

Is Miami-Dade County already experiencing another condo boom — this time strictly in the luxury market?

During the first half of the year, some 400 condos worth at least $1 million each sold in just the resale market alone, according to CondoVultures.com.

That’s up 7.8% from the same time last year. Even more remarkably, the median per-square-foot price hit $699. Prices in the luxury market haven’t been near that number since 2007.

Eye-catching individual deals have accented the luxury boom, including the recent $25-million sale of a condo on South Beach and three sales of more than $10 million at the St. Regis Bal Harbour Residences.

Many buyers are foreign — from Latin America, Russia and Europe. For most, the units are investment properties or second homes.

“If I’m an investor, I can buy a new unit that was built during the boom … for a cheaper price than new construction,” says Peter Zalewski, principal of CondoVultures.com. He notes that there are 10 condo towers already under construction east of I-95 from Miami to northern Palm Beach County. Developers have proposed another 35, including one in South Beach with prices at about $1,500 per square foot.

Cash is king, too. Although Zalewski doesn’t have updated statistics, he says that a year ago, a CondoVultures study found some 80% of the condo transactions in the county were all cash. Plus, he notes, “there’s typically about a 15% to 20% premium that someone is likely to pay if their offer is based on financing.”